The “Part of Us” Art Show: Ending Stigma around Vitiligo

People in Uganda that have the skin condition vitiligo are often stigmatized for the entirety of their life. Vitiligo is a skin condition that occurs when a person’s pigment-producing cells die out in some skin lesions, which presents itself as white-pink (unpigmented) skin patches. There is no cure to date, but there are treatments and surgeries that help manage the skin condition.

According to the Global Vitiligo Foundation, vitiligo is an autoimmune disorder that has an estimated 1% prevalence worldwide, where about 70 million people are patients. Normally, women seek more treatment than men because the societal discrimination is more profound; females are just expected to follow beauty standards. Vitiligo can develop at any age although most people develop it before they’re 20 years old. The exact cause of vitiligo is unknown but it may be due to genetic susceptibility. What is known, though, is that Vitiligo is not contagious.

There is, however, a lot of ignorance and myths around vitiligo that force those affected to live in discrimination. It is common practice, in Uganda at least, that any disease or condition we do not understand, we easily compound it under witchcraft- which then forces anyone who is a victim to be stigmatized. 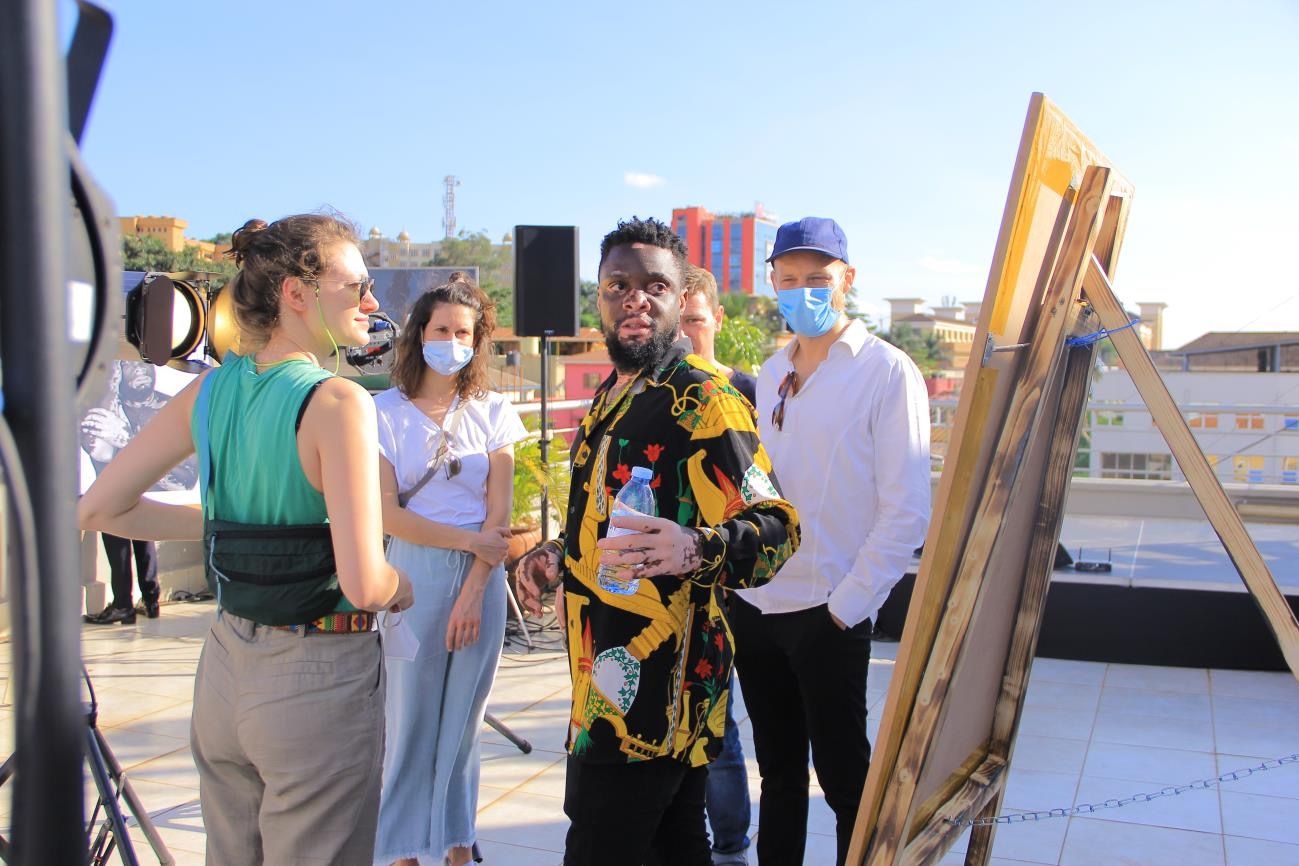 Isaac Kyoyeta aka Vitiligo King at the ‘Part of Us’ art show with revelers in April 2021. Courtesy: Martin Senkubuge

The biggest belief in Uganda is that a person with vitiligo, carries burns from angry twins. The myth is that the person’s parents sacrificed twins and because twins are powerful spirits, they burnt that person. Other people believe that someone with vitiligo ate some part of the twin and the twins burnt them, or that someone stepped somewhere twins were separated, and the ground was cursed - so the twins burnt that person.

A lot of us are privy to this ignorance which spreads to the perception that Vitiligo is contagious. As a teenager, I too had the same perception about a school mate that had the skin condition. We often used to refer to her as “ogwe owamabara” which translates to “that one with patches”. The ignorance compounded in such a statement is very disappointing, because as human beings we reduced another human being to a skin condition.

Unfortunately, Eva Atukunda is someone who was met with such harsh trials. In most cases, people with vitiligo, especially in Africa, live in such hostile conditions with nowhere to go. Luckily, with the “Part of Us” initiative and art show that exhibited in April 2021 at the Goethe Zentrum premises in Bukoto-Kampala, her story gets told as she embraces her beauty. 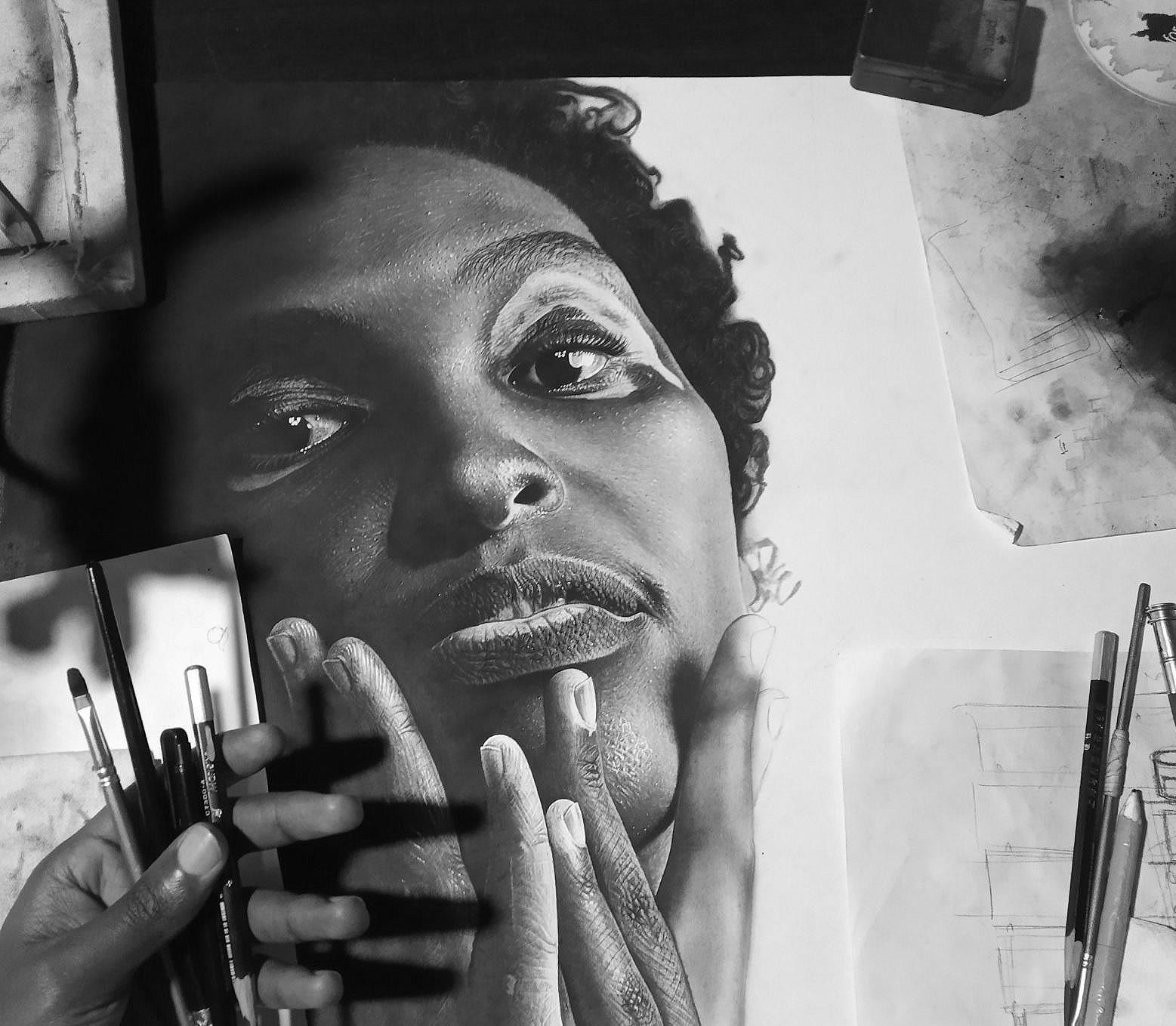 Eva is a 31 years old mother of two, an accountant and a Vitiligo champion.

"I got vitiligo when I was 10 years old after I suffered from malaria. I took quinine injections and then the patches started appearing. After consulting many herbalists and dermatologists, I found out that I suffer from vitiligo and I’m allergic to Sulphur. Since then, a long journey of medication started. When I got vitiligo, my peers through my primary and secondary school didn’t treat me differently. It was only when I came to university that I felt that stigma for the first time” she recounts.

She added “one time, I was in a taxi (public transport mini-bus) and this lady started telling her neighbor how my parents sacrificed twins because they were witches and then the twins burnt me so that’s why I’m like that. You know being in a situation where everyone ignores you, no one asked what happened to me, everyone just started talking with their preconceived myths and ideas. From that day I started using makeup every time I would be leaving home. It became permanent with me.”

Opportunity came knocking long after this incident. Eva notes “When I was contacted to be painted for the “Part of Us” art show, I was still using make up to cover up my vitiligo. But I always wanted to be myself without the makeup. So I embraced the experience, because it was a great way to express my beauty through art. After all, everyone appreciates art. I also wanted to show people that having vitiligo doesn’t mean you are less beautiful.” 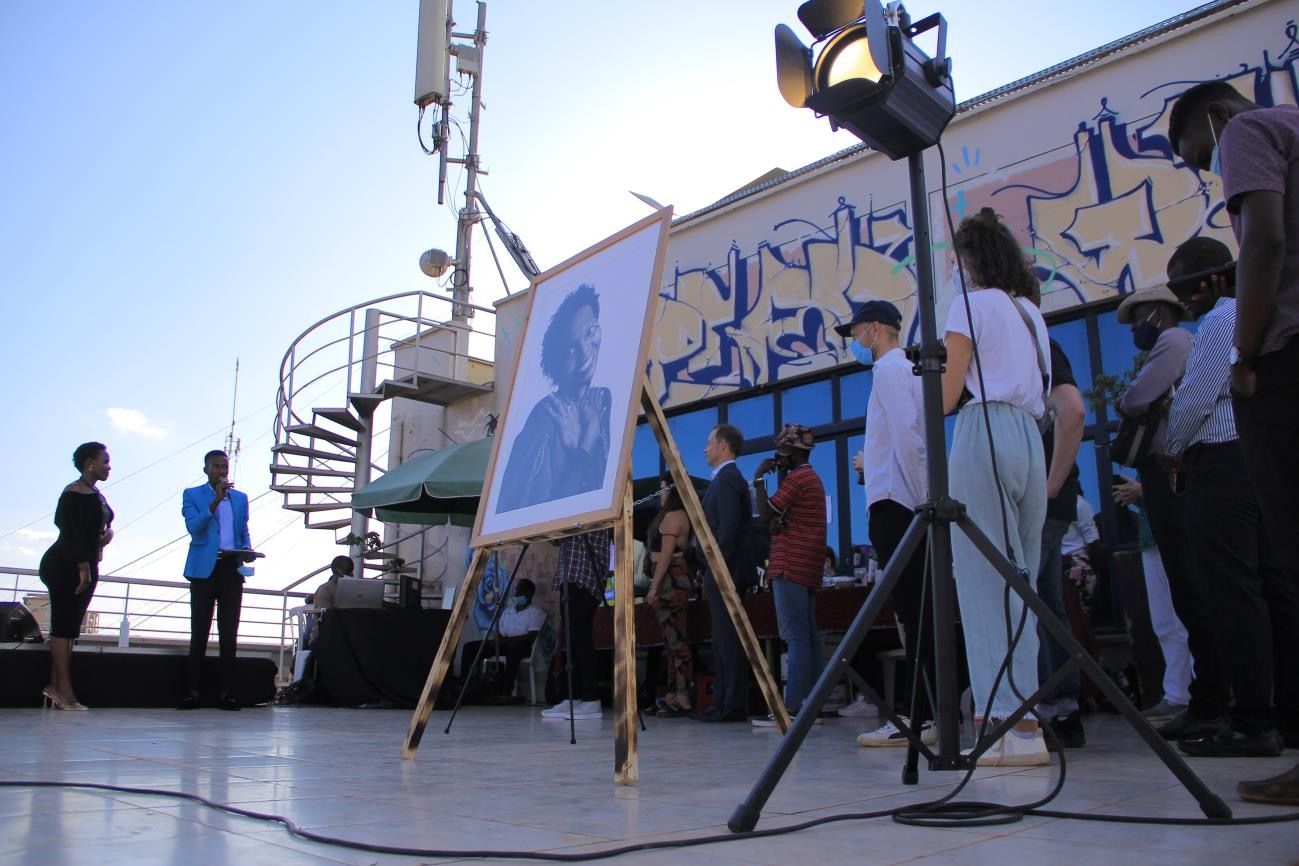 Exhibiting the Eva Atukunda portrait “Potent Super Woman” at the ‘Part of Us’ art show in April 2021. Courtesy: Martin Senkubuge

Art as an Activism Tool

To dispel negativity, art as a form of activism works to advance beauty that many people are too closed off to see. Therefore, the art show “Part of Us” works to show society that people with the skin condition vitiligo are indeed part of us and are no less beautiful. “I believe I’m not anything else but an activist, I’m an ‘artivist’. I speak with images and that to me is powerful” said the “Part of us” art show artist SMQ.

The artist Senkubuge Martin Quid, SMQ, is a Ugandan artist born in 1996. He graduated with a first-class degree in Industrial Art from Makerere University. He has been drawing since he was a young child, where he would use charcoal cubes from the cooking area to draw on the door of his bedroom. He is the founder of the “Part of Us” initiative, a visual campaign of creating awareness about Vitiligo. 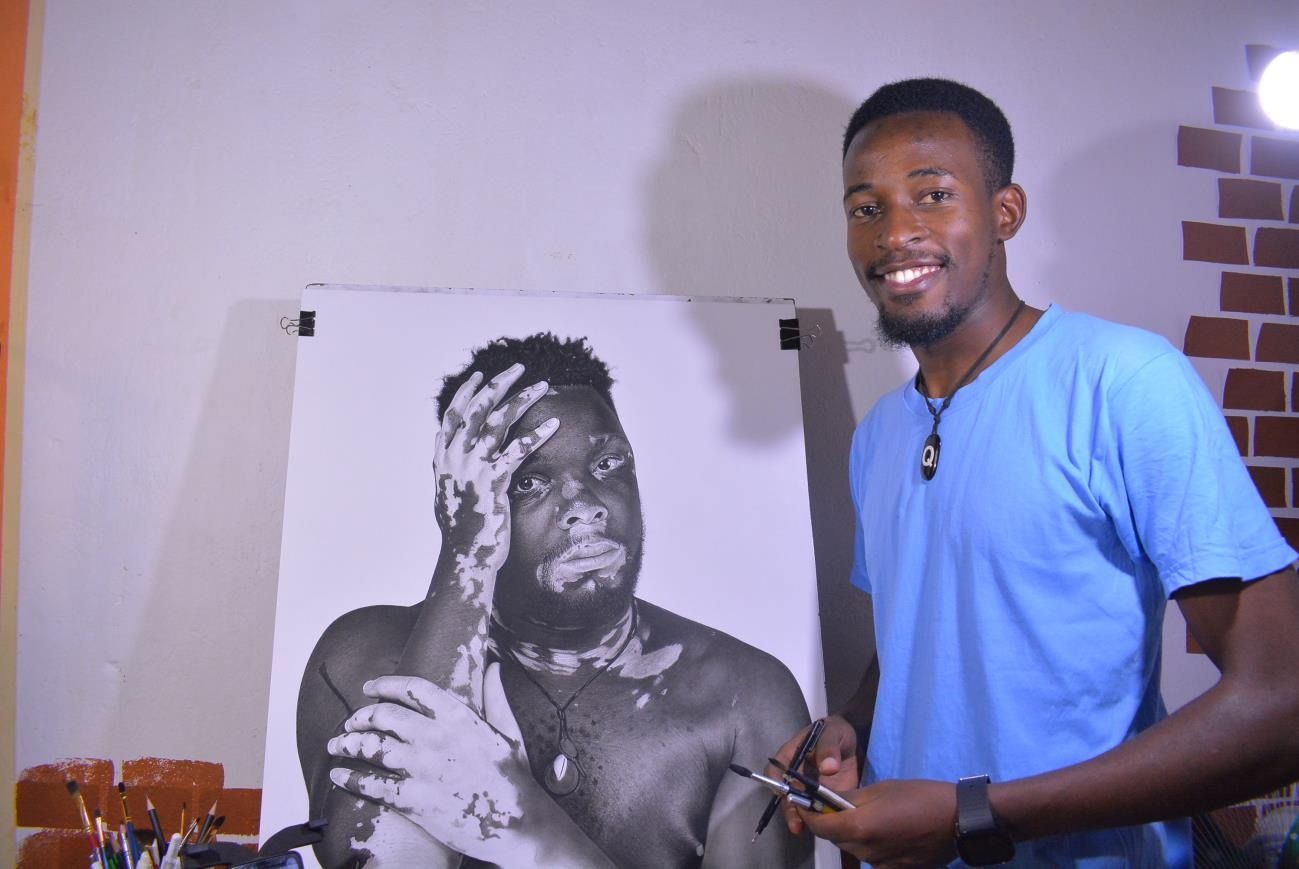 The Story Behind the Art Show

As a Ugandan, SMQ too grew up on the same myths about vitiligo until a comment by a lady at an art show changed his mind.

On the 28th September of 2019, SMQ had his first exhibition titled “SMQ Mysteries”. At the exhibition, there was a lady interested in one of his pieces titled “Melanin Tattoo” which was a ridicule of bleaching one’s skin and taking away the tattoo one is born with. SMQ told Andariya that as he explained his thoughts about bleaching and the self-hate that leads to people wanting to change themselves, he used the singer Michael Jackson (MJ) as an example. He added “the lady told me ‘Wow, I thought artists did their research! I’m detached from the artwork already but what I can say is MJ didn’t do the bleaching as society blames him, he did it as an alternative kind of treatment for his skin condition, Vitiligo.’  That was the turning point for me; it haunted me. I decided to research MJ and Vitiligo.”

It was at this point that the “Part of Us” initiative was birthed. SMQ then went on to do more researchand watched more interviews of Michael Jackson (MJ). He recalled “with teary eyes, in his interview with Oprah Winfrey on February 10th 1993, he explained his vitiligo skin condition. He sounded falsely judged. I saw how miserable MJ felt and wondered about someone in Uganda who is not as privileged, how do they feel? I discovered that there was too much ignorance. There are facts to be explained like MJ was explaining, but no one was listening.” 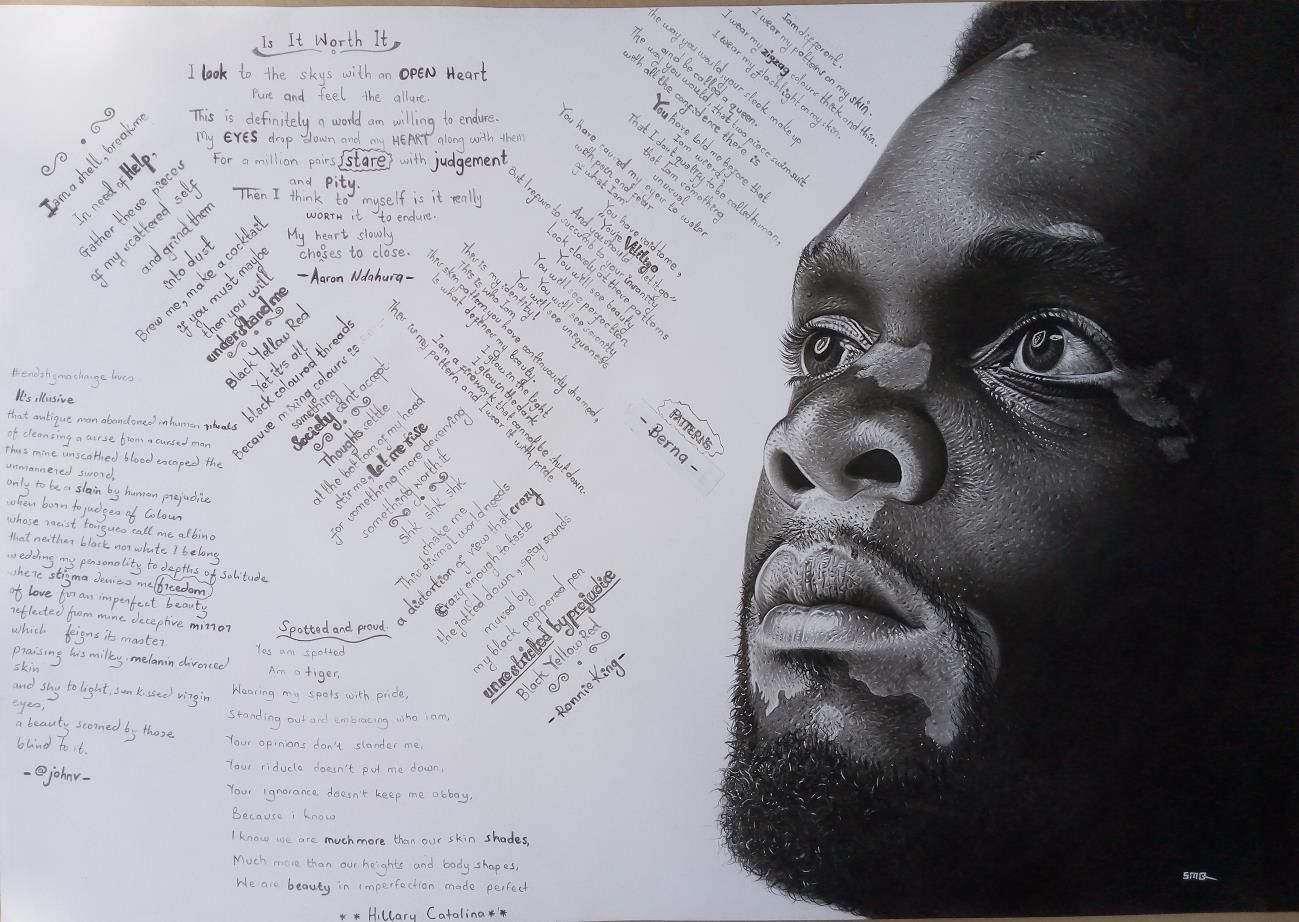 Further probing into the art show titled “Part of Us”, we interviewed SMQ in Kampala.

Andariya: How did you start to turn your vision into action?

Senkubuge Martin Quid: I won a project grant for two million shilling from Goethe Zentrum (GZ) in April 2020. Luckily Kyoyeta Isaac, Atukunda Eva and Tushabomwe Davis, had bought my idea of drawing them for an art show. I took these guys for a photo-shoot and got the photographs for reference as I drew using charcoal pencil on papers of different sizes. We had set the show to be in August 2020, but it didn’t happen due to delays in shipping art supplies during the COVID-19 Lockdown. We pushed to a few other days in 2020 and finally to April 2021, when I showcased at the GZ premises for a whole month. We also held a launch event with poetry performances and a speech from the dermatologist Dr. Ssekindi Faizo.

Andariya: What was the purpose of calling the show “Part of Us”?

SMQ: For the five months and three weeks I was doing this work, I kept talking, rapping and singing to it. I was looking at the art pieces and I was thinking these people are simply beautiful and part of us. That’s how I came to call the art show “Part of Us”.

Andariya: What message did you want to put across?

SMQ: Highlighting the stigma and stress that comes with vitiligo. The art work was aimed at capturing the attention of the people, and then when they are concentrating on the artwork, educate them about vitiligo.

Andariya: Why did you attach a poetry aspect to the art show?

SMQ: I wanted to put a voice to the work. We put out the photographs on social media, several poets wrote and sent in their work, then we got other people to write the poems on the art pieces. The poetry helped inspire deeper conversations about the vitiligo.

Andariya: How was the reach of the art show?

SMQ: We translated the stories of the models in six languages. The idea, actually, is to translate the stories into more languages. This is because people who perpetuate the stigma in society may not understand English. So, if we communicate only in English, people who are inflicting stigma will not get the message. On average we got 10 to 15 people viewing the art at the Goethe Zentrum premises in Bukoto, from Monday to Friday for the whole of April.

Andariya: Did you experience any personal pressure producing the art show?

SMQ: Physically, I had fatigue because I was working on this for almost six months. Mentally the biggest issue was having confidence in myself to do this work.

Andariya: What is the immediate outcome of the art show?

SMQ: Out of this show, we have started a Vitiligo Family Link where people with vitiligo are already connecting on a WhatsApp group. 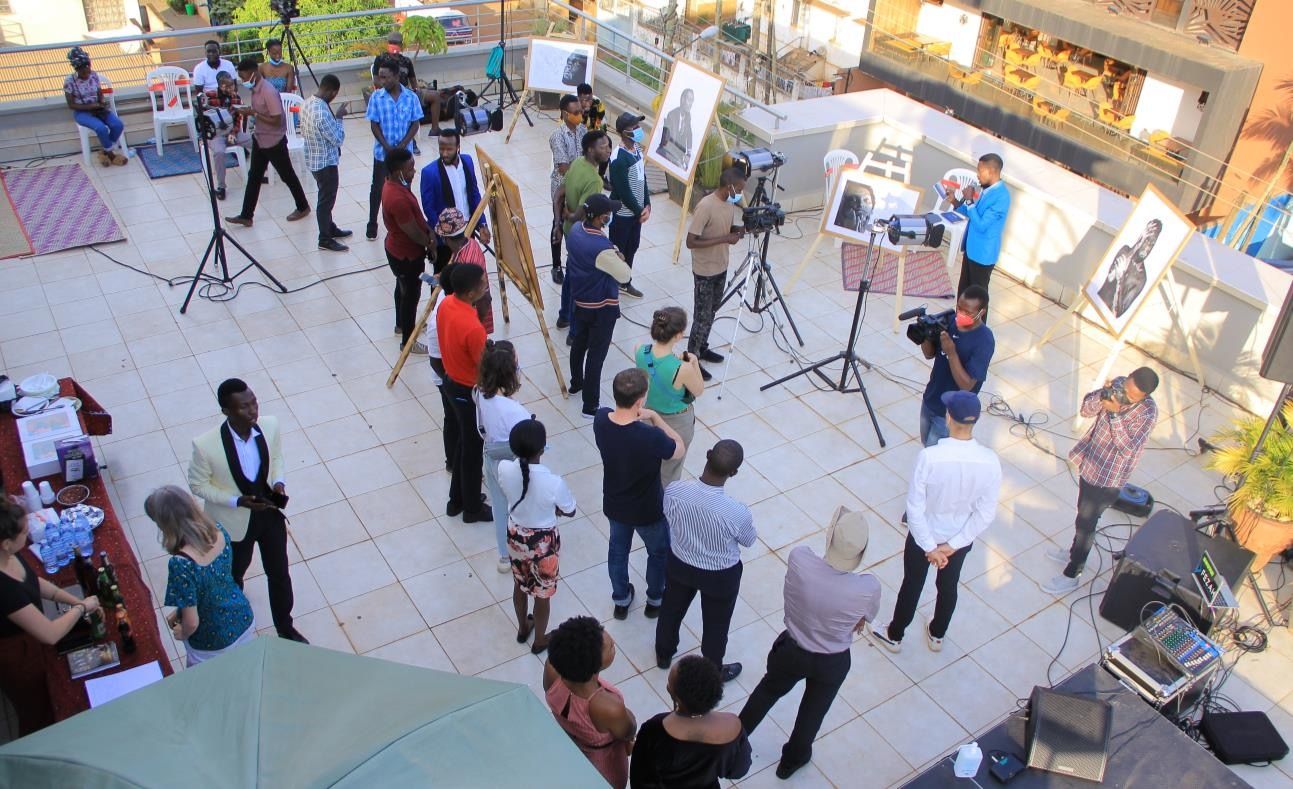 The ‘Part of Us’ art show at the Goethe-Zentrum premises in Bukoto-Kampala in April 2021. Courtesy: Martin Senkubuge

The “Part of us” show while executed well in terms of the art pieces, is about something much bigger. It’s about giving a voice to people that have been discriminated on based on the skin condition vitiligo. Vitiligo isn’t contagious, it is not caused by a curse, it is a skin condition that can be managed by medicine. People with this condition are part of society and they are just amazingly beautiful as any one of us. It’s time to end the stigma! 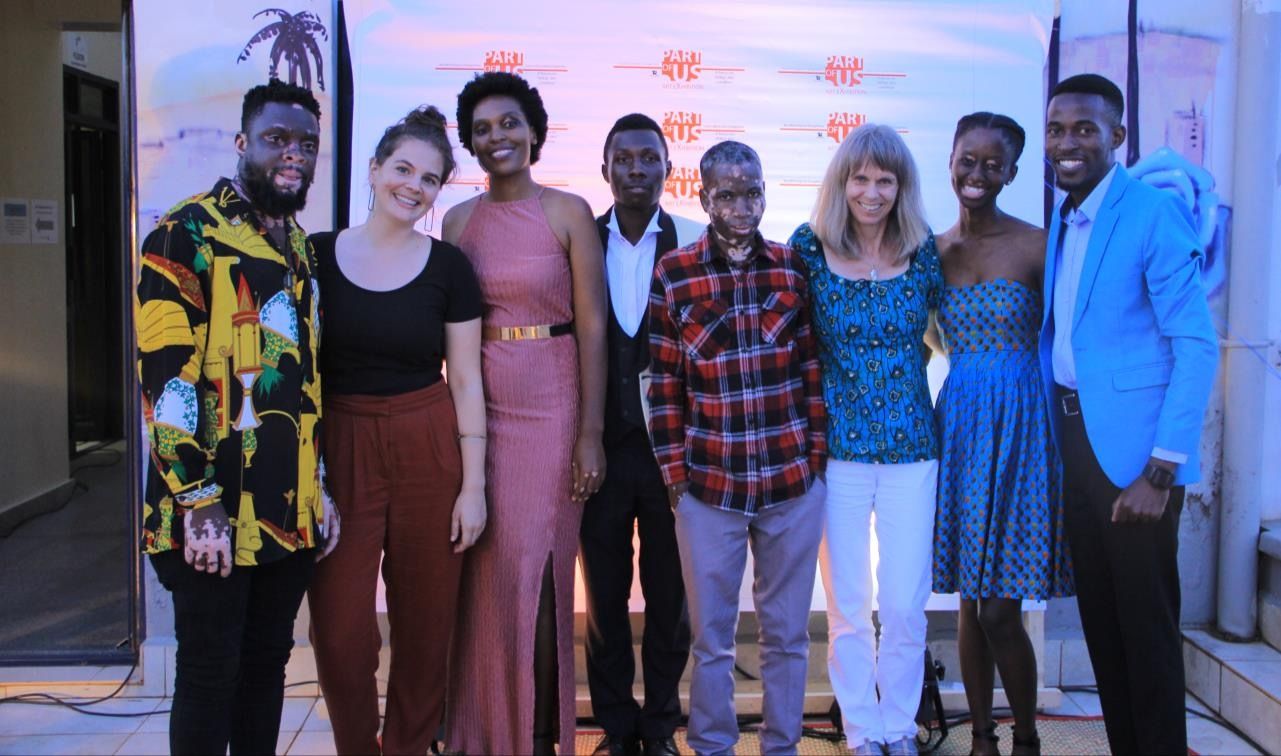 Part of the team behind the ‘Part of Us’ art show in April 2021. Courtesy: Martin Senkubuge